By Rick Burkhardt for Indiana On Tap

It was a busy summer for Grand Junction Brewing Company. Jon Knight, Shawn Kessel and I have been trying to meet for several months, however, increased demands and appearance requests had taken up most of their time. But I’m actually thankful for the delay because I now have more to tell you. More on that later.

Commitments relaxed and I finally sit down with Jon and Shawn inside the brewery while the doors are closed to the public-my second visit within a week. Jon tells me how the 1860’s era building was originally a blacksmith’s shop and I spy the floor-to-ceiling, double-wide window where swinging doors once hung. I imagine a horse-drawn carriage 150 years earlier, rolling right into the very spot we are sitting.

“Hillbilly Englishman”
Brought up in the US but born in England, Jon Knight made many trips back to his home land, falling in love with the congenial feel of the neighborhood pub. A great-grandfather was a proprietor of one of those pubs and his grandparents ran a fish and chips shop, nurturing his thoughts of someday owning his own pub.

A self-proclaimed “hillbilly Englishman”, Knight swore that he never wanted to live with regrets, so one day several years ago he simply awoke one morning and said, “F— it, let’s do it!” Though having some home brewing experience, he vowed to surround himself with experts, saying, “I never once entertained the idea of being part of the brewing process.”

Seeking a place in Westfield that would offer the warmth and character of that friendly English pub he loved, Knight found the perfect building in the center of town. However, learning that Westfield forbade food trucks, he came to a sudden realization…“I guess we’re going to be a restaurant.” Knight (along with a silent partner) opened Grand Junction Brewing Company in April, 2014. The name is a nod to the town’s rich history in the Underground Railroad, and to the Monon and Midland railroads that once intersected there.

Enter Shawn
Jon acknowledged there were some growing pains in the first few months but they changed course when he brought in Shawn Kessel from Great Fermentations to be the head brewer. After a huge learning curve with the 7 bbl. electric system, Knight said that Shawn now has the beers “locked in.” Effusive in his praise for Shawn, Jon was not about to lose him to another brewery so Shawn recently became a co-owner. (Spencer Mason from Flix Brewhouse has just joined in as assistant brewer.)

Shawn began his brewing journey, along with neighbor/noted area homebrewer, Tim Palmer, after he received a “Mr. Beer” kit from his in-laws. Refining his skills at Great Fermentations, Shawn’s confidence in his brewing skills convinced Knight that he was the right person for the head brewing job. Personalities meshed, transparency ruled, and they forged ahead like their locomotive brand. 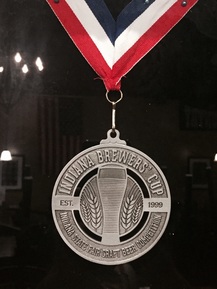 The Beer, Of Course
Their recent silver medal in this year’s Indiana Brewers Cup for GJBC’s Mulligan Scotch Ale, and being close with several other beers gave Jon “complete affirmation” for what they were doing.

I was already impressed with GJBC’s beer, remembering the Black Hat Brigade I had at Brew Ha Ha this year, and their 1520 Hefeweizen at Summerfest, but I wasn’t prepared for what came next. When Jon told me that Dark Road Robust Porter was one of the best beers he’s ever had, another person might accuse him of over exaggeration. But not me. I had it. On nitro…and it was awesome! (It made my Indiana On Tap top five beers this year).

Shawn convinced me that using a very simple grain bill (oh, and expert brewing skills) can produce a delicious beer. He explained that just a tweak in the mash temperature, and not the grain bill, got Dark Road to exactly where he wants it.

A gentle stroll has moved to a whistling skip as a massive comb-over is occurring in Westfield, and they’ve taken some bold steps in becoming a destination instead of some place you drive around. Taking a page, or perhaps a chapter, out of Indianapolis’ playbook, Westfield went all in recently on youth sports to help jump start their own town. Here’s your answer:

So, whatever impression you have of Westfield, be prepared to have that turned upside down.

While the food at GJBC is very good (my wife and I suggest the fish ‘n chips and the tenderloin) (Ed. note: start with the pork rinds. Trust me), Jon said several times throughout the evening, “It’s all about the beer.” He continued, “The end goal is to be a significant regional player. We want to continue to build this where the brewery and the company is very focused on being a very strong player in the microbrewery market,” while staying small and true to form.

Having outgrown their current location in a mere 1 ½ years, Jon said the decision to move to a new location will be made by the end of the year. He stated, “We will literally…be tripling the size of our production facility within the next twelve months.”

Expect them also to start canning their beers before too long.

It is not too difficult to find a correlation between Westfield and GJBC in that as the future unfolds, the past is not forgotten, and they appear perfectly situated to grow right along together. In his best understatement of the night, Jon accidently punned, “We’re definitely picking up steam.”

Grand Junction Brewing Company is located at 110 S. Union St., in Westfield, In.