Posted at 18:55h in Bloomington Brewing Co., This Week On Tap, Uncategorized by Justin Knepp 0 Comments

By Cory Huffman for Indiana On Tap

This crazy, topsy-turvy little world rarely allows us simplistic pleasures anymore. Pleasures that were once deemed unpretentious, have suddenly worn themselves thin. Thin to the point that we all too often overlook them – take them for granted. That’s because we’ve become too complicated and our complications have become as common as suburban kids donning biblical names. We’re spread too thin. We have too much at our disposal so we’re always found wanting. We have created an extrinsic epidemic of ADD.
​

I’m guilty of this just as much as you.

But for today I’m choosing to digress – cherry-picking a proverbial step back in order to allow myself a blink of distinguished nostalgia – a musing redirection toward the simple things that truly make me happy.

One of those such “happy moments” is a yearly road trip with my father, brother, and good friend. We started doing this a few years back as a mini beer tour. Each February at the culmination of the 8th grade boys basketball season (I was the coach) we would pile into my truck and head toward little Nashville. Frigid weather and icy conditions never deterred us as we carefully navigated along highway 135 toward our destination. We preferred the comradery of an actual road trip versus the convenience of just “getting there” that’s why we took highway 135 from Corydon to Nashville, ignoring illustrious I-65 entirely.

A quick pint of Hare Trigger IPA and plate of pulled pork nachos at Big Woods Brewing gave us the strength we needed (and a much deserved pit-stop after that curvy quagmire of 135 between Brownstown and Nashville) then headed west along highway 46 toward Bloomington.

It was here in Bloomington a few years ago, at the Bloomington Brewing Company inside of Lennie’s, where I met her. 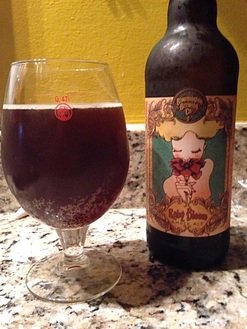 From the first sip I was smitten. There was something oddly familiar, like a beckoning, that immediately elevated Ruby toward the top of my beloved beer chart (a mental chart as opposed to a literal one). That’s why this week I decided to pay homage to one of my favorite beers. As I poured her into a glass, I read the label art while the reddish brown (ruby?) elixir settled nicely.

Per the label: Ruby brings smooth and drinkable bliss to an increasingly bitter beer world. Deep amber with notes of toffee, caramel and dark, wildflower honey, Ruby tempts the senses with inviting chocolate aroma and a soft, supple finish.

Equally at ease in lively conversation at the pub or quiet nights around a fire, Ruby is in a class of her own. We think you’ll agree.

And this is a beer that is still every bit as enjoyable as she was the first time.

So I urge you to revisit one of those “simple” things in your life that make you happy and indulge yourself.

Until next time, this is where I leave you.