By Indiana On Tap

Small Town Luxury at its Best. That’s the motto for the Charley Creek Inn of Wabash, Indiana.  Small town? Well…that depends on your definition of small.  With approximately 11,000 residents, I’ve visited much bigger towns and I’ve been to much (much) smaller Hoosier towns.  Luxury at its best? Well—that’s one thing that I simply won’t debate. It is. And I’m not just talking about the craft beer—but I’ll get to that in a bit.

Let me first tell you a story about Hotel Indiana. Hotel Indiana was built in Wabash in 1920. Like many hotels built a time long ago (but not forgotten), newness had faded and time had inevitably set in. By the early 2000’s, Hotel Indiana had evolved into an apartment building that was a shadow of its former self. That all was about to change in 2007.

Richard Ford, a Wabash native and resident, purchased the building, invested the much-needed dollars for restoration, and had a plan to return the building back to something special—and that’s exactly what he did. In 2010 it reopened as Charley Creek Inn, a historic boutique hotel with thirty beautifully appointed guest rooms, suites, on-site dining, and much, much more.

An exterior view of the Charley Creek Inn of Wabash–home to thirty beautifully-appointed rooms.
The tribute to the era of the Roaring 1920’s can also be felt all throughout the Inn. The lobby itself, while minimalist in décor, looks and feels like a page out of The Great Gatsby.  Twenty Restaurant (appropriately named) anchors nearly half of the street level of the hotel and has been meticulously decorated to emulate fine dining of that that decade, but with more of a casual, upscale feel. The restaurant is open seven days a week for breakfast, lunch, and dinner (and weekend brunch).

The bar area of Twenty Restaurant, known as the Green Hat Lounge, features a piano bar with live weekend entertainment every Friday and Saturday evening.  The music area of the Green Hat Lounge is striking. The first thing you’ll notice is the enormous mural of Hoagy Carmichael—a famous composer, pianist, singer, actor, and bandleader with ties to the Wabash Community—overlooking the stage. Hoagy may best be known for composing the music for “Georgia On My Mind,” a song you just may have heard of–made famous by Ray Charles—an American music icon you just may have heard of as well. The Green Hat Lounge, much like all of Twenty Restaurant, is the perfect blend of ‘modern meets 1920’s classic.’

Venturing to the other side of the street level of the hotel, you’ll find the Ice Cream & Candy Shoppe, which sits directly across from its counterpart, the Wine & Cheese Shoppe. Let’s skip the main course and start with the candy. There’s a lot of it. Nearly 600 pounds to buy by the piece or pound, in fact.  Along with the ice cream (and sodas, and chocolate), it’s all distinct, nostalgic and hard to find anywhere else.  That’s what makes it so special. The nostalgia extends itself into the details of the glass showcases, candy bins and even the woodwork.  If you’re lucky, like I was on this particular visit, you may even get to hear a musical note or two from one of their TWO classically-trained opera singers on staff. How’s that for service?

Ok–now to the Wine & Cheese Shoppe.  Why would I talk about Wine & Cheese on a craft beer website for craft beer readers? I wouldn’t. I’m instead going to talk about the Shoppe’s massive, hand-picked craft beer selection. This was, after all, the reason why I was here. The selection is something to be proud of.

And they should be. 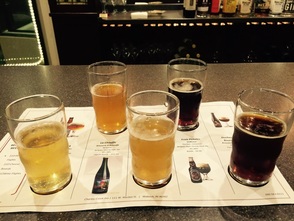 While Indiana craft beer is certainly well-represented, the collection of available beer is truly global. Like I said, it’s hand-picked and a special effort is made to continue to make new and unique beers available every week. They stay away from the big name, macro beer and instead focus on finding beer that shares that same quality that has made The Charley Creek Inn such a standout itself: Uniqueness.  And on this particular Friday when I visited, the town’s “First Friday” event was in full swing.

“First Friday” takes place the first Friday of every month in downtown Wabash, all year long—and I was about to be treated to a Belgian craft beer flight as part of the Wine & Cheese Shoppe’s First Friday celebration. Look—the Belgian beers were amazing—all of them. Why were they unique? Well, for starters, I had never heard of any of them. Oh, and they were all delicious. I’d love to mention them by name, but the reality is that most of them will no longer be available by the time you read this. They’ll be replaced with something new.

Staying on the topic of unique, I learned that the craft beer flight itself that’s available on the first Friday (and Saturday) of every month also changes each month. Meaning, the theme or style is always decided in advance and it rarely repeats itself. The previous month’s flight was “the best of canned craft beer,” which was, as you’d probably guess, unique and rare craft beers only available in cans.

While the craft beer flights are only available on the first weekend of each month, the beer, wine and spirits are all available any day of the week—both to enjoy in the Shoppe with a friend or two or to take home and enjoy on your own time.

Ok, I said I wasn’t going to talk about wine and cheese. I won’t talk about the styles and styles of gourmet cheeses, but I’d be remiss not to make mention of the large variety of boutique wines from Indiana (and every major wine region of the world)–along with the wide variety of small batch spirits. Wine tastings are complimentary every day of the week and include a wide variety of wines. And like the craft beer, the wine selection is also ever-changing. Can’t find what you’re looking for?  The Wine & Cheese Shoppe will special order any of your favorite wine, craft beer or spirits. How many other places will take the time and effort to do that? (I’ll answer that for you—very, very few).

​While the Inn highlights the core of the downtown Wabash marketplace district, the immediate area surrounding it offers more than its fair share to see and do. The Wabash County Historical Museum is one of the finest museums not only in the state, but in the country. It’s a living, breathing exploration for local (and Indiana) history—not simply a graveyard for relics of the past.

Modoc’s Market, an espresso/coffee bar directly across the street from the Inn, not only serves up some amazing caffeinated drinks, it also serves up some history to that time back in November 11th of 1942 when the Great American Circus was in town.  No one could have predicted the legendary event that would ultimately take place in the town (and in this building) on that afternoon—an event that would ultimately captivate a national audience.  Modoc, one of three gray Indian elephants, escaped the circus and terrorized the downtown and surrounding area for five days. Picking up the scent of peanuts roasting in the Bradley Brothers drugstore (the building’s tenant at that time), Modoc smashed her way through the back door, knocked over the peanut roaster, and had her fill of warm shelled delicacies before moving on. Modoc would eventually wind up in a completely different county before finally being captured and returned to the circus, unharmed. Pictures and newspaper clippings can be found throughout all of Modoc’s Market to entertain those patrons looking for more than just a great cup of joe.

The Eagles Theater and its throwback, classical marquee, lights the downtown area for nearly two blocks in either direction. Keeping with the motif, in addition to its first run features it also shows those classical movies that remain as timeless as the marquee itself. The Theater is also just across the street from the Inn.

The rest of the downtown offers locals and visitors everything from antique stores, to art galleries, to pizzerias, to 1,500 seat theaters. Ok, let me explain that last one. Downtown Wabash is also home to the Honeywell Center and its big city-sized Ford Theater that regularly brings in well-known acts, like Willie Nelson, Kenny Rogers, and even the late B.B. King, just to name a few. The Honeywell Center is also home to a gallery of its own, and much, much more.  Like the Inn, it’s a Wabash destination in its own right.

After spending a weekend at the Charley Creek Inn and being asked to write a story about how it ties into the growing craft beer movement now obvious in every corner of this great state, I spent some time thinking about it. Just writing about the beer would be too difficult. Why? Because the Charley Creek Inn and downtown Wabash is so much more than just the perfect getaway for that craft beer fan looking for the ideal overnight or weekend vacation. I came for the beer, but I left with an experience, a few new friends, and several reasons to visit again sometime very soon.
​
Some say that history repeats itself—and I agree. This hotel and what it stands for was a major source of pride for this ‘small town’ when it opened in 1920.  And, five years after its grand re-introduction, it is once again. But, I’m a craft beer guy…and after getting to experience the Inn for myself, I think they need to change their motto. Something more appropriate would be: “Small Town Luxury and Craft Beer at Its Best.”
The Charley Creek Inn is a participating partner of the Indiana On Tap Tasting Society Marketplace—Indiana’s first and only craft beer membership and rewards program. Their multiple offers include 25% off an overnight stay (subject to availability & a one-time use), 10% off an overnight stay (recurring use, subject to availability & not valid with any other offers), $5 towards the purchase of any alcoholic item in their Wine & Cheese Shoppe, 20% off any merchandise in the Wine & Cheese Shoppe, 10% off any purchase in the Ice Cream & Candy Shoppe, and a free dessert with the purchase of a dinner entrée in Twenty Restaurant.
​
Share
Print page
0 Likes